6 Mistakes I Made Backpacking Asia 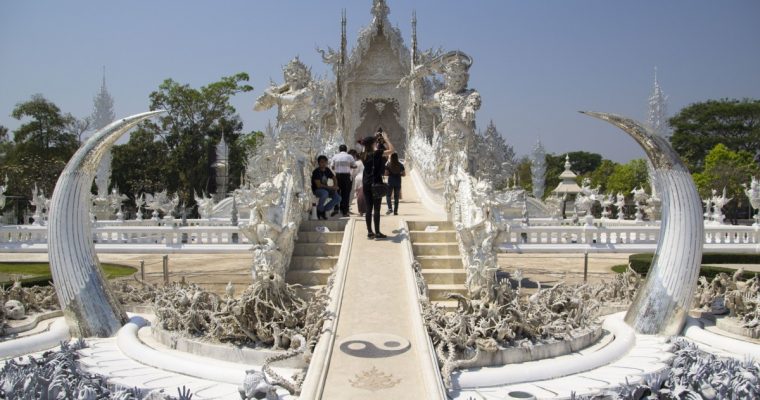 Last year, (2017) I spent three weeks backpacking Asia with one of the other Suitcase Six ladies. Marie and I had an unforgettable time exploring Singapore, Malaysia, Thailand, and Hong Kong together. As I reflect on our adventures, I realize we made quite a few mistakes backpacking Asia. I wanted to share a few of the lessons I learned the hard way on this trip so you can avoid making the same mistakes we did. Mistake One: Not Staying Hydrated

This was one of our biggest “backpacking Asia mistakes”. I did not think to bring my own water bottle on our three week trip. I totally underestimated how thirsty I would be after walking around in the heat and humidity sightseeing, trying to figure out where the hell we were as we lugged our backpacks around the streets. The tap water is not safe to drink in many places we stayed so we could either buy bottled water or drink something else most times. I hate paying for bottled water because I don’t like wasting the plastic. I also know I can often get it for free if I’m resourceful. It’s so much less satisfying to spend your travel budget on bottled water rather than on new food or activities.

Unfortunately, I was not that resourceful and without a water bottle. I went without water a lot of times I probably should have sprung for some. I ended up with a few minor dehydration headaches and one terrible hangover which would likely have been more bearable if I had chugged some water before bed. If you’re one of those people who drinks water regularly at home, know that you’ll probably want to drink more water than usual when you’re traveling. This is normal – you’re often doing more physical activity than you might be on a regular workday in the office. Pack a water bottle. Remember that the heat is serious and that a bad hangover can really wipe out a precious day of travel. Drink water whenever you come across a clean, free supply. I recommend including water in your travel budget so you aren’t surprised or hesitant to “splurge” on the necessities.

I have problematic knees that often send sharp pains up my legs when walking long-distances. This is exacerbated by shitty walking shoes, the likes of which are usually quite fashionable but impractical for the heavy wear and tear of backpacking life. Our first full day in Singapore, Marie and I had to spend some time in a mall looking for walking sandals that would get me through the next 20 days. I was already starting to limp and hobble around and at that point we had really only navigated to and from our hostel.

Luckily, I found a pair of sandals that were quite comfortable, met my fashion bare-minimums, and didn’t cost a fortune. However, it would’ve been a lot easier if I just made sure I packed shoes I knew were good for walking long-distances, rather than packing several cute sandals that rendered me incapable of walking after a few miles.I also brought flip-flops to wear in the shower but those were stolen by a small dog at the Banana Bungalows who had a penchant for running off with spare flip-flops left outside the dining hall area. As in many Asian cultures, taking your shoes off before you enter someones home is a sign of respect. At the Banana Bungalows this was a practice both for that reason and to prevent tracking sand all over the common area, but it meant a smattering of shoes were available for the taking by mischievous pups.

Unfortunately, when a dog ran off with you shoe it probably ran into the bushes or mangrove forest. I assumed there were snakes and spiders and all other number of animals that I cared more about NOT encountering than I did about recovering my flip-flops so I left them behind and spent the next two weeks in a constant mental battle between wearing my other sandals into the shower (which would leave them wet and soggy for an indefinite period of time) or risking a trip into the shower room without them (and gambling to expose my feet toward God knows what on the floor of the hostel communal showers). Don’t pack shoes that suck for walking just because they’re cute, and keep an eye out for small dogs who are notorious for stealing flip-flops.

The first few days in Asia, Marie and I struggled to figure out how to feed ourselves. We are both very prone to hunger and need to eat every three or four hours or we get rather irritable and have a hard time thinking straight. The problem is that we would wait to start looking for a place to eat until we were already quite hungry. By the time we figured out what we wanted and navigated there, we be past the point of hunger. Couple that with the fact that we often didn’t know what we were ordering.  More than once we ordered something that ended up being spicier than our palates could comfortably handle.

I attribute our discomfort to eating infrequently, eating less than normal when we did sit down for meals, and experiencing digestive struggles as we adjusted to new foods. Worse still, I experienced my terrible hangover on one of these earlier days. During that long day I really wished I’d packed a few Cliff bars or snacks in case of “emergencies” like a terrible headache and nausea. I dislike eating American food when I’m in a new place with towns because I want to soak in the culture. But when you’re sick, exhausted, and desperate for some comfort food you don’t have to break out a map to obtain, having a familiar snack is very nice.

In Leana’s Woman of the Week interview she recommends packing some peanut butter because you can eat it with a lot of different fruits and carbs it gives you good protein. She also recommends bringing lemon ginger tea for the stomachaches that are all too common when filling up on unfamiliar cuisine. Bring something easy on the stomach to snack on in case of emergencies. High-protein snacks like a jar of peanut butter or peanut butter crackers are perfect.

For some reason when I’m traveling I don’t seem to take walking distances as seriously as I do when I’m home. If you told me I’d have to walk a mile and a half from one bar to the next when I’m in Indiana, I wouldn’t do it. But if you told me that our hostel is a mile and a half from the city center, I’m like “Oh, that’s a piece of cake, we can walk that easy”. This is a poor assumption. It’s almost always harder to navigate abroad than at home.

Several times in Asia we set off on a “short walk” only to find that we were completely lost and misguided on how to actually get to our destination. Other times, we were much further from our desired location than indicated by whatever hostel staff we talked to. Still other times we found the “path” was rather treacherous to walk and not so much a path at all. I’m not sure there’s a way around this. If you can’t access a car then you’re left to your bipedal devices. Nonetheless, consider walking distances carefully if you’re directionally challenged like me.

I think this hints at a need to either spend more time researching hostels/accommodations that are close to the attractions I want to see, or get better at reading maps. Hard to say.

Mistake Five: Assuming The Weather Is The Same Everywhere

Before our trip I researched the weather in Thailand and double checked it in Singapore. It seemed pretty consistent and I naively assumed that all of Asia would be experiencing similar warm climates. By the time we got to Hong Kong, we realized it was actually much cooler than the beaches of Thailand. Fortunately, the temperatures weren’t so drastic that we were miserable. Instead, it was a good reminder that weather can change quite a lot in what may seemingly small distances. It’s probably worth checking out the weather in every location you’re visiting. This is especially true when you travel for long durations or when seasons are changing. It’s the worst stepping out of an airplane to realize you’re going to freeze until you buy a jacket. Alternatively, it’s never comforting to realize you packed 90% black clothing items when you’ll be walking around outside in the sun most of your days.

We had a 6 AM departure flight at one point from Chiang Mai to Hong Kong. I knew this was early when we booked I didn’t think it through well. I assumed an early flight would give us a full day to explore Singapore once landed. Theoretically, this was true but I didn’t take into account how absolutely exhausted we would be after the red-eye flight.

For most international flights, it’s a good idea to get to the airport about two hours in advance. When you’re in a place where you don’t speak the native language, this cushion is critical. This meant we needed to arrive at the airport about 4 AM.. I forgot this meant we had to wake up and secure transportation from our hostel to the airport even earlier. We requested a taxi and went to bed early so we weren’t sleepless zombies navigating a foreign airport. Tired anyway once we arrived in Singapore, I felt too drained of energy for the sight seeing I hoped.

Figure out how long it will take to get to the airport for these early morning or late night flights. If you’re staying in a small town or a far distance, it may be quite difficult to secure transportation. Of course you don’t want any unexpected, huge expenses. BUT you usually don’t want to miss your flights and will do whatever it takes to get to the airport. Plan ahead – ask your hostel/hotel staff to help arrange transportation in the middle of the night if you need it.

Have you had any travel blunders or travel tips for backpacking Asia? Share them below in the comments!

Thanks for reading! Planning a trip to Asia?

Want more on Asia? Head to our Asia archives for the full library.