One Week in Mongolia: A Sunpath Tour Adventure 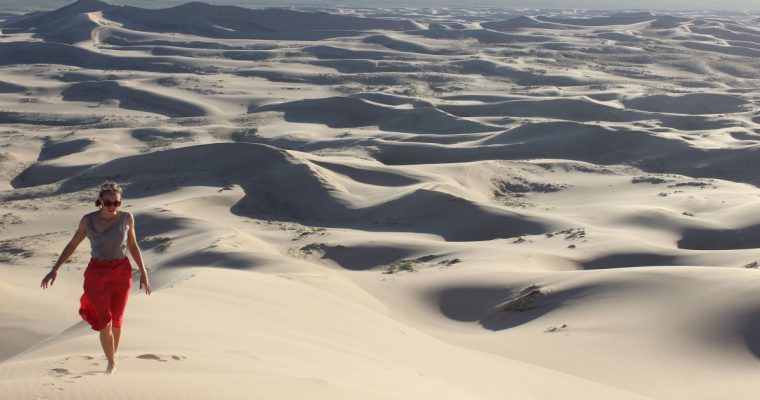 Contents hide
1 Transportation in Mongolia
2 Accommodations in Mongolia
3 Mongolian Food
4 Our Itinerary for One Week in Mongolia
4.1 Day 1: Tsagaan Suvarga or White Stupa

I joined a Sunpath Mongolia tour for an 9-day, 8-night adventure through Central Mongolia and the Gobi region this September which was an adventure of a lifetime. Joined by three other travelers in my van, and several other tour groups along portions of the journey, we traveled about 2300 kilometers as we explored the changing landscapes and nomadic culture on Mongolians outside the capital city.

For anyone who loves camping, natural beauty, or mutton, I would highly recommend this tour! If you’re one who prefers luxurious travel with all the comforts of home and more, I’ll warn you now that this sort of trip probably isn’t for you. Either way, my one week in Mongolia was an unforgettable adventure for both the highs and the lows I experienced.

Our mode of transportation for our one week in Mongolia was a Soviet style van that was made around 2010, though it looks like it was made decades earlier. Accompanied by our driver and guide who sat up front, the four of us tourist sat on the two benches (which faced each other) as we drove around six hours each day.

Mongolia is a really large country and despite all our driving, we didn’t even come close to seeing the majority of it. Beyond a few highways leading to and from the capital city of Ulan Bator (or Ulan Baatar), most of the roads were dirt or weren’t really roads at all. This meant our pace was much slower than it would be if you’re road-tripping through the United States, for example, hence the large amounts of time we spent in the car.

Fortunately, the views were beautiful the entire time and there were plenty of stops each day, whether for bathroom breaks (behind any bush or dirt-mound coverage you could find), to stock up on snacks in a market, or to take photos of the wildlife of which we saw a lot. Sometimes our driver would spot a fellow driver coming another direction and stop to smoke a quick cigarette together.

During the ride, we were entertained by reading, bouncing around through all the 4-wheel driving (no seatbelts provided), and listening to the Mongolian tunes on our driver’s MP3 playlist. There were limited songs to choose from – maybe 40 or so in total – so we were all singing along to the melodies by the end.

Our accommodations each night were gers, owned by nomads who contracted with Sunpath Mongolia to host tourists each tourism season. Generally, our nomadic hosts would have their own ger, decorated elaborately inside with most of their belongings inside. The rest of the gers typically held 4 twin-sized beds with a table or fireplace in the center. We slept in the ger with the people in our tour van and often ate breakfast and dinner inside our ger too depending on the weather (which was beginning to get quite cold).

A ger, or yurt (in Turkish language), is a circular temporary home held up by wood supports and insulated with felt between a tarp on the outside and fabric or thick carpets on the inside. On the interior, two wooden supports stood in the middle. Traditionally, you are not to walk through these posts, nor pass anything between them, walking along the outside in a clockwise direction instead.

The gers of the nomadic hosts are maintained primarily by the women, who decorate the homes with each move. Typically families move four times a year with the seasons, prioritizing good pastures for the livestock on which they rely, and keeping out of the wind in colder seasons.

The left side of the ger (facing the entrance) is the woman’s domain where the kitchen supplies and food are stored. The right side is the man’s domain where gear for dealing with livestock are kept. The back of each ger holds the décor, varying in quanity from ger to ger, but typically including a shrine of sorts with religious statues, family photos, candles, and other decorations.

There seemed to generally be two beds in each family ger, one on the left and one on the right side, while the gers for tourists held more beds given the lack of other furniture and equipment.

Some of the gers we stayed in as tourists had fires, but almost all of the nomadic family gers had a fire/heating system which they used to cook and to keep warm during the night. The beds were twin-sized but with wooden planks in place of a mattress, with a thin pad or blanket covering in most cases. I’d have imagined they could create some really comfortable beds with all the wool from the sheep and other animals around, but alas, they were extremely hard and made comfortable sleep rather elusive. I’m not sure how I would have fared on a longer trip but for one week in Mongolia, I managed pretty well.

Toilets came in the form of wooden stalls or wooden walls to provide some privacy as you’d squat over the holes dug deep into the ground. Try not to look down if you can avoid it! In areas with lots of flies, they could sometimes get pretty terrible to use. In luckier cases in these situations, there would be little canisters of charcoal or something similar to emit a lot of smoke and drive the flies away. In unluckier cases, you might prefer to just walk far into a field and do your business elsewhere.

Our guides made breakfast each morning which was actually quite varied. It usually included a few slices of fruit, an egg or sausage on bread/toast, coffee or tea, and some biscuits or cookies. A surprising amount of cookies and sweets were included in the regular line up.

Lunches were split between meals cooked by our guides and stops in restaurants at the market. When stopping in a restaurant, the typical choices included fried noodles with mutton, fried rice with mutton, dumpling soup or vegetable soup (with mutton), regular dumplings with mutton, or mutton with rice and some veggie salads of beets, cabbage, or carrots.

Dinners were mostly the same, but we had a nice variety of some dishes prepared by the guides like spaghetti, spicy chili, chicken fingers, and seaweed soup. In addition to all the snacks I’d brought along out of fear I’d go hungry, I did the opposite and ate enough to probably gain a pound or two. That said, by the end of the week, I was ready for some new cuisine that didn’t have goat on the menu and included a few more spices and a lot more veggies.

Most times when we’d arrive at a new camp, we’d join our nomadic hosts for milk tea (heavy on the milk, light on the tea, and sometimes salted) and a bread biscuit. In Mongolia, etiquette requires to pass things with your right hand, and to receive with either your right hand or both hands.

We also had the change to try airag, fermented milk of which we sampled both horse and camel varieties, and sheep and goat curd (which tasted like pecorino or other hard cheese but we were informed is made differently than cheese without any other additives. I was not a fan of the horse milk which had a slightly alcoholic taste (though is super low in alcohol content). The camel milk on the other hand tasted really close to sour cream though the consistency was like typical milk. For some families, in the summer, they survive mostly on this fermented milk and curd, which provides the bulk of the nutrients they need to survive.

Our Itinerary for One Week in Mongolia

Now that I’ve given you the lay of the land, I’ll share the itinerary we followed and some of the highlights and lowlights of each day. Most days we didn’t have a clear idea of what we were doing or what was going on until we’d asked our guide several times, but it was just as well and made for even more of an adventure.

We left from the hostel in the morning and after making a stop at grocery store to stock up on snacks and hand sanitizer, we were off to our first destination, the white stupa. A stupa is a dome-shaped structure built as a Buddhist shrine, and we saw them all over Mongolia, typically with blue scarves wrapped around them. The cliffs were named for their resemblance to the Buddhist stupas when seen from a distance.

BOOK A TOUR IN MONGOLIA WITH SUNPATH 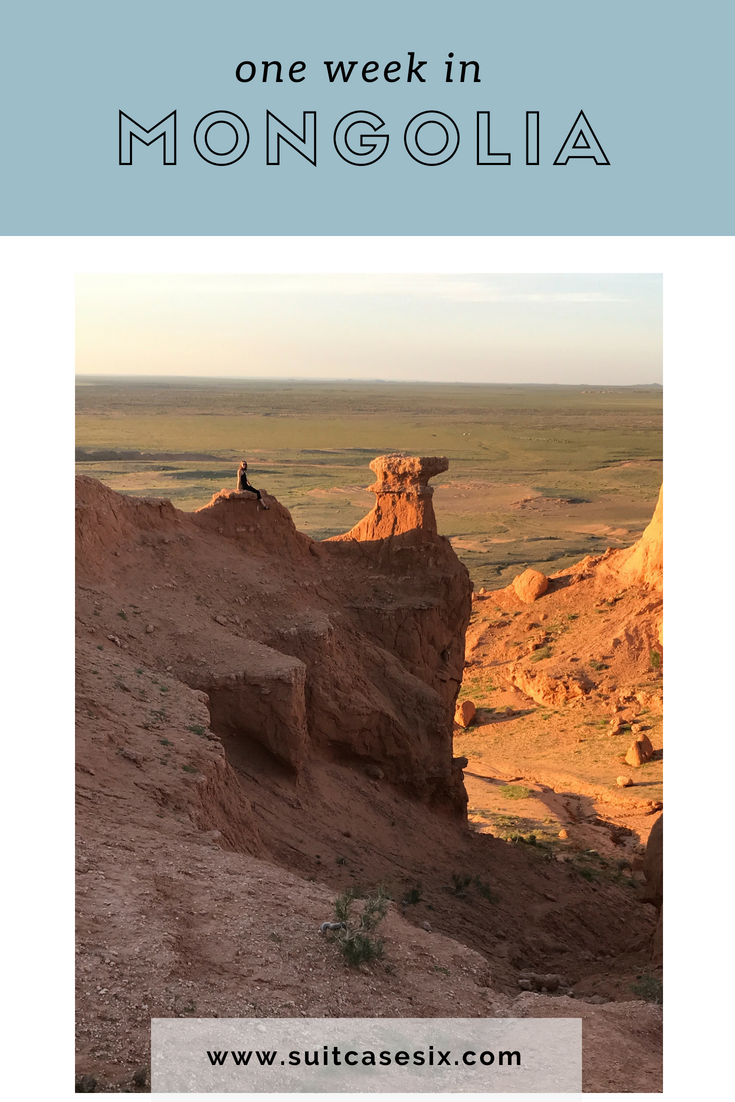