The Sinking Ship: A Must Try Vegan Food Restaurant in Indianapolis 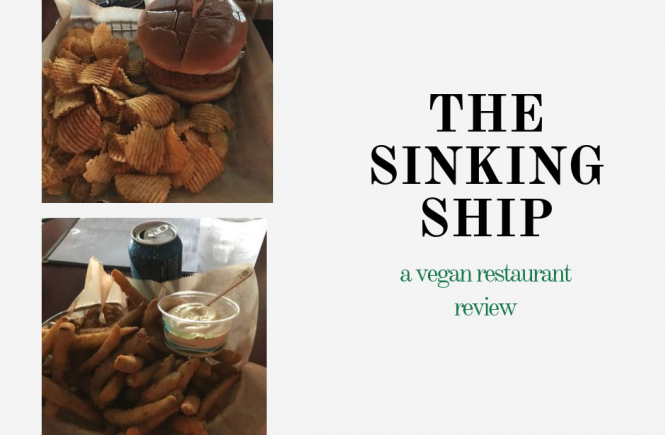 Contents hide
1 THE SCENE:
2 FOOD AND DRINKS:
3 SERVICE:
4 PRICES:
5 HIGHLIGHTS:
5.1 For other Indy recommendations, check out my Local’s Guide to Indianapolis!

Since I’ve adopted a plant-based diet, I’ve learned that most restaurants are either geared toward vegans 100%, or not at all. When restaurants serving primarily meat-based dishes do offer vegan options, there are usually only a handful to choose from and sometimes it feels like an afterthought. That’s why I am so excited about The Sinking Ship, one of my new favorite restaurants in Indianapolis.

After my third visit, I knew I needed to write a review and officially recommend this place. Here’s why I think The Sinking Ship is one of the best restaurants in Indy for vegans, vegetarians, and meat eaters alike!

Picture this: a pub with punk-rocker vibes, dim lighting, rock music playing over the speakers, and pinball machines lined up against one wall next to the bar. If you go to a place like this anywhere else in Indianapolis what you’ll find is typical pub food. Burgers, chicken wings, lots of fried food, and some cheap beers.

At The Sinking Ship they’re mixing things up. While they have had some great vegan options for a while, on my last visit I was shocked and excited to see a brand new menu revealed!

Rather than a typical menu with tiny icons indicating the somber vegan options, The Sinking Ship has cleverly designed a menu of dishes, half of which are vegan and half of which are meat-based. Then they put them together on the menu in a clever way that makes it easy to find and fun to peruse. Bravo!

Don’t even get me started on the amazing options. Vegan burgers, vegan versions of all the salads, tenderloins and gyros and sandwiches – all vegan. My boyfriend, who is not vegan, just needed to turn the menu upside down for an equally nearly identical menu in carnivorous equivalents.

The beer menu is extensive too, offering yummy sours (my favorite type) which are often times not found on tap at other breweries, alongside dozens of other styles and breweries.

I ended up ordering two passionfruit & guava sour beers and a vegan schnitzel, while Christian opted for their beef brisket grilled cheese. And of course we had to split a side of pickles fries – some of the best I’ve had, with their vegan chipotle mayo and vegan ranch!

When we received our food, I was excited to see that The Sinking Ship is even using plant-based cups to serve their sauces, which are compostable in specific facilities. I remembered to ask for no straws so I can’t speak to whether or not straw-free is the norm (I can’t recall with certainty my straw experiences from the previous visits, but I’m inclined to say they don’t bring them.

Our waitress was very attentive and helpful, and made a point to let us know our appetizers were served when we were away from the table playing pinball. I’ve definitely been places where they would not come and find you and would instead just set the food down and walk away, so we appreciated the heads up.

As I mentioned, the lighting was pretty low even during mid-day lunch, so my pictures aren’t the greatest. Nevertheless, it’s not often you can find a restaurant that accommodates both vegan and non-vegans with equal effort, and everything I’ve ever eaten here has been delicious so I thought it deserved a post of its own.

The Sinking Ship is pretty affordable with low to middle of the road prices. Appetizers run between $7-12 (the pickle fries easily were enough for two, maybe three people). Entrees are about the same at $9-14 and come with a generous portion of chips, but you can upgrade to other sides for only $2. Nothing on the menu costs more than $14 which I found to be totally fair for the portion size and quality.

Basically, if you have both vegans/vegetarians and meat eaters in your group, or some beer, pinball, or rock fans – this is a must-visit spot.

For other Indy recommendations, check out my Local’s Guide to Indianapolis!