Woman of the Week: Melissa 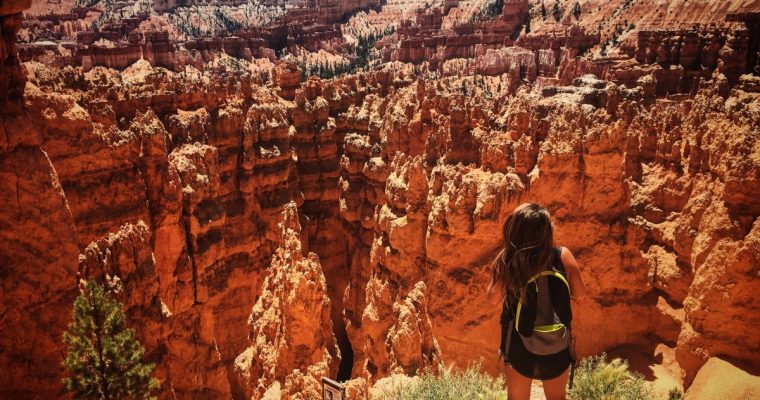 Contents hide
1 1. Tell us about yourself.
2 2. Why do you travel?
3 3. How do you balance travel and work?
4 4. What is the best lesson you’ve learned from your trips?
5 5. Tell us about one of your favorite travel experiences.
6 6. If you could share one travel tip, what would it be?
6.1 Thanks for reading! Want more travel tips from Melissa and women like her?

I’ve known Melissa since the sixth grade when I immediately decided I wanted her to be my friend. Her travel to Germany as a high schooler inspired me and opened my eyes to the idea of traveling the world. Since then she has not slowed down, and as roommates for three of our four years as students at Indiana University, her sense of adventure has continued to have a huge influence on me. I’m am so excited to see her setting off on her own year-long adventure around the world and highly recommend her wisdom to anyone who thinks there are too many obstacles to making an adventure happen. I’m lucky enough to be from where all the other amazing ladies on this blog are from, but I currently live in Chicago. I am an entry level analyst at a super mega giant consulting firm. I didn’t even go to business school – I was actually a linguistics major in college. So I’m not super passionate about the work I do, but I am passionate about spending a lot of money on stupid stuff (some of my fav stupid stuff: travel, food, drinking, and musicals). So, basically, I took the highest-paying job I was qualified for out of college, even though it’s not my dream job. #NoStigma. As far as my travel background, nobody in my family has ever really traveled internationally, and I think they’re always a bit freaked out that I do it so much. But I first got interested in traveling when I started taking German in middle school. Learning a new language and learning about a new country and culture was really eye-opening, and I just became obsessed. I spoke German at home all the time and going to Germany quickly became my end-all be-all life goal. Then one semester I met a German foreign exchange student at school, and everything fell into place. I did a foreign exchange in Germany, and ever since I’ve been on a quest for out-of-my-comfort-zone experiences.

It’s really funny because as you [Sarah] remember, Germany didn’t go that well at times – I had some crazy host families, it was hard to make friends, but for some reason it didn’t really discourage me from future travel. I think that that’s kind of the why we do it actually. You know it’s going to be tough, confusing, and let’s face it, nowhere is quite as first-world comfortable as America. But I still have a hunger to go. My mom tells me I’m an “experience junkie”, maybe that explains it. I think I just love novelty and change. I’ve never really thought about why I like to travel, it’s more like I have some unexplained innate drive, and then there’s not a reason why not to do it. Of course there are plenty of logical reasons – yeah, you learn new stuff and meet new people and become all wise and worldly, but to me it’s much simpler and subconscious than that. Leaving the country just popped in my brain one day at age 16 and since then I’ve always just had an insatiable desire to go.

Well, most of this for me has been luck. I’ve only worked for five or six months (since college), and I just so happened to find a role in my company that was remote, which was really uncommon. So it was partly intention and persistence on my part, as in I did look for something remote, and I did work hard to get the position, but it was lucky that it was even available. Since I’ve been remote I’ve been going on small trips around the US to visit friends and working from home or in cafes the whole time.

Then recently, I applied and got accepted to this program called Remote Year, where you travel internationally with a bunch of other people who work remotely at various jobs or as freelancers. I’ll live and work in 12 different international cities over the course of the year.

Another component of the “balance” is obviously the finances. I was lucky enough to find a job that would financially allow me to work remotely and travel, especially on an expensive program like Remote Year. Basically, picking a relatively high paying job I didn’t really care about has been paying off so far because it allows me to live my life exactly how I want it. We start in Split, Croatia, which is kind of the “hub” for Remote Year programs. We’re in Europe for 3 months, Asia for 3 months, South America for 5 months and Mexico for 1 month. I think I’m most excited for Japan because it had never been on my travel radar, not like I didn’t want to go there, I just hadn’t put it on my short list. I just don’t have a lot of preconceived notions about Japan, but that makes me excited to go there with a really open mind.

What are you most nervous about?

The working part! I’ve studied while traveling, but it’s going to be really hard to be in a new place every month with 50 people my age to play with, and stay focused on my day job. A lot of the other participants are part-time or freelancers with flexible schedules, so I’m sure I’ll go through some FOMO having to stick to my schedule, but I’m well aware that this “problem” is a great one to have. I’ll be grateful for every second. I’m also somewhat concerned about the finances – I have basically no savings (YOLO) and I’ll have to say no to some things. Again – very happy to be lucky enough to have this “problem”! Resiliency and resourcefulness – things go wrong often when traveling because everything you experience in a new place is so out of context, especially in non-western destinations. It makes it more enriching and exciting to be in a place so different, but it can also make you feel uneasy, like you have no control over anything. So I’ve learned to do a TON of research before going anywhere, and then you just feel like a badass when you’re completely owning it out there because you planned ahead.

I really value resourcefulness after traveling, and there is a level of resourcefulness that I feel you can never truly achieve unless you have left the US. Thinking ahead, using all your resources, problem-solving when things inevitably go wrong, in a place where everything is unfamiliar and out-of-context, you can’t replicate those lessons in your own bubble.

One of my favorite experiences was in Pai, Thailand. We just went to a bar one night and came across this little hippie cult – they were performing these fire dances for the whole crowd, and had glitter all over them. We were so mesmerized by them and obviously wanted to get in on that glitter, so we eventually approached them and they totally accepted us into their posse for the evening (and we got glitter smeared all over our faces). The funniest part was when Rachel and I were walking home, and we stopped at a 7/11 (bless the Toastie, the best drunchie in all of Thailand) and only then in the fluorescent lighting of a gas station did we realize how dumb we looked so we burst out laughing about all the glitter. The hippie folks weren’t even Thai people, but that’s what I love about travelling. You might not have a super traditional cultural experience, but you’re bound to find someone interesting from somewhere interesting who gives you an unforgettable, eye-opening experience that you couldn’t get at home. I always get an international SIM card. It’s so simple to get one, and data is usually SO much cheaper than it is in the US. For me it just gives me peace of mind to not have to worry about finding wifi all the time if I need to use Google maps or Uber or make a call in an emergency. IT’S WORTH IT. You’re worth it.

Also I would say it’s absolutely necessary learn some of the local language, even if it’s just a few words. You don’t want to show up somewhere rattling off in English and come off as an entitled and ignorant American. We are so lucky to be natively fluent in the language that’s most widely spoken in the world, but when we go off to enjoy someone else’s country, we owe it to them to put in the effort to say a few things in their language.

Thanks for reading! Want more travel tips from Melissa and women like her?