All Posts, Woman of the Week Interviews

Woman of the Week: Tyeisha 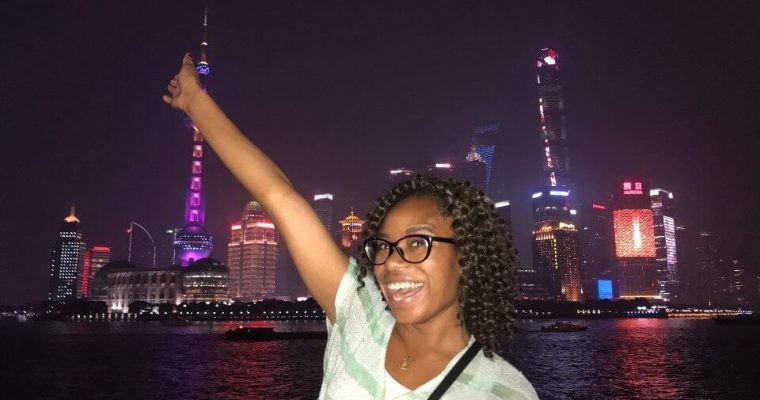 Contents hide
1 1. Tell us about yourself.
2 2. Why do you travel?
3 3. How do you balance travel and work?
4 4. What is the best lesson you’ve learned from your trips?
5 5. Tell us about one of your favorite travel experiences.
6 6. If you could share one travel tip, what would it be?
6.1 Thanks for reading! Want more travel tips from Tyeisha and women like her?

Tyeisha is an undergraduate student at Indiana University, who I’ve worked with in two mentoring programs there, College Mentors for Kids & HOPE Mentoring, where I currently work. She’s an incredibly sweet person who has just recently caught the travel bug, and it was a pleasure to interview her and hear about her first trip and what she has planned next! I am going to be a junior and I’m studying criminal justice and psychology. Going to Asia was my first time on a plane and my first time going abroad, so I hadn’t really travelled before that – I’ve only been to, like, seven states. I will be travelling to Spain in the spring as well as Ecuador, and hopefully I’ll be travelling the summer after my senior year just as a kind of “you’ve survived college, let’s go somewhere fun!” But I’ve always really wanted to travel, so it was great that I finally got the chance. And, actually, I got my passport for free from IU. They did a drawing and pulled my name out, so they paid for my passport, which was good, because it was almost $200. And, after I got the passport, I was kind, like “Well I have to go somewhere now”.

How long will you be in Spain & Ecuador?

I’m studying abroad for the semester, and I’m going to Ecuador with my church from my home town for two weeks before I go to Spain, so I’ll go to Ecuador early January, come back for like five days, and then go to Spain!

I really like travelling, because I like seeing what’s outside what I’ve seen my entire life. I grew up in the Midwest and that’s really all I’ve ever seen, so it’s exciting even if I’m just travelling in the country – my friends and I went to Pittsburgh and that was interesting to see the East Coast life style. I also especially like going abroad and getting to see how many things are different but, yet, similar, in other countries. I love seeing the different environments – the nature is different from place to place, the air, – it’s really cool to see how other parts of the world look, because Earth is huge and just waiting to be explored! So I’m going to study abroad in Spain, but I’m also in this 8 week research program. So for China and Korea, probably 3 months before I left, I asked the director of my research program “is it okay if I leave for two weeks?’ because, you know, it’s in the middle of our research project. And he said “I don’t care if the 8 weeks are consecutive – if you want to work a couple weeks early and hit a few weeks after– as long as at the end of your summer you have your research done, it’s fine.”

Most people didn’t really start working on their research until June 6, but I left for Asia on May 31st. So I started working on my research, really back in January writing the plan for it, but started working on it late April, early May, so I was already ahead. So when I came back, and I hadn’t touched it for 2 weeks, I was still on par with everyone else.

So I guess I balance travel and work just by making sure I have things done before. That’s what I’m trying to do now for study abroad – I want to work at a specific university with a specific prof in grad school, so I’ve already contacted him because I know I’ll be gone for a semester in spring and won’t be able to really contact him while abroad. I usually just try to get things done early so I can be done and enjoy my time abroad. I think the best lesson is patience. Understanding that things might not always be what you thought they were going to be, in either direction. Maybe you thought it was going to be better or maybe you thought it was going to be worse, but understanding that different cultures have different mannerisms & morals, and it doesn’t make it better or worse, just different. Riding on the subway [in China], people would push and shove – they don’t have a word in Chinese for “excuse me” it’s just kind of “watch out”.  Sometimes I thought it was kind of a lot to handle, but I realized that it was just a difference in the culture. There was a lot of patience dealing with language barriers. We had only a few students who spoke Chinese in our group and when they were there, we would have to be patient with them to translate what we were saying, and when they weren’t with us, we had to be patient with looking things up and using google translate.

Realize there are those barriers and don’t freak out; don’t let yourself get too overwhelmed by the differences. One of them was – well, I’m black, obviously. In China and Korea, there aren’t a lot of black people. So everywhere we went, there were people that wanted to take pictures with me and they wanted me to hold their babies. People were touching my hair, wanted to touch my skin. It was just really funny. My friends were making jokes like “tell them you’re Beyonce, they won’t know”.

That’s a difference from America– if you’ve seen something or someone you haven’t seen before, you wouldn’t ask to take their picture. But in Asian culture it wasn’t rude- they were being nice, praising me.

We stopped at this street where there were a lot of weird things to eat. Lots of Chinese people won’t eat these things, but tourists will eat it. So we were eating scorpions and a crowd of like fifty Chinese people stopped to take a video – that was one of my favorite memories. Eating scorpion off a stick in the middle of the street and just laughing and watching everyone. I would say try everything and try to immerse yourself in the culture. When we went, we tried really hard not to ever eat American food. We survived doing that, except we did have pizza one night, but we justified it by saying at least it was made in China. We tried not to be stuck on our phones – we had these rules of, during the day, you can only pull your phone out for pictures– you can’t be on social media and stuff. Which in China wasn’t a problem because most social media is blocked unless you had VPN, and we had VPN apps but it was, like, an hour a day of use, so we couldn’t just sit on it.

We tried to just talk to people if we knew they spoke English. Even if they didn’t body language always works! We tried to say, “let’s just try to immerse ourselves as much as possible.”

Thanks for reading! Want more travel tips from Tyeisha and women like her? I'm an eco-friendly travel agent, passionate about planning unforgettable adventures that have a positive impact. I'd love to help with your next trip!