Woman of the Week: Emily S 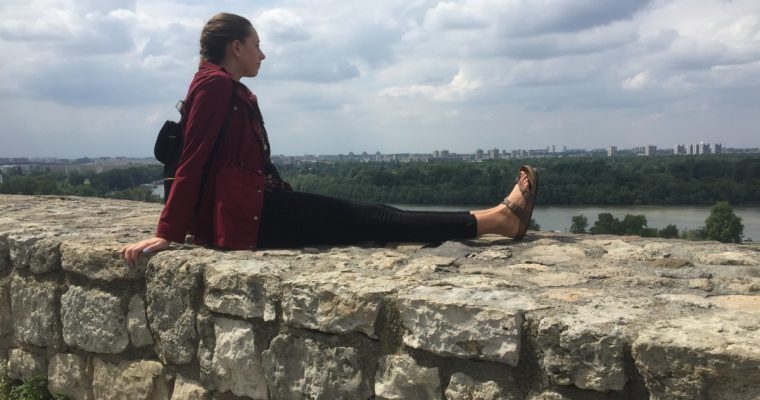 Contents hide
1 1. Tell us about yourself.
2 2. Why do you travel?
3 3. How do you balance travel and work?
4 4. What is the best lesson you’ve learned from your trips?
5 5. Tell us about one of your favorite travel experiences.
6 6. If you could share one travel tip, what would it be?
6.1 Thanks for reading! Want more travel tips from Emily and women like her?
6.2 PIN IT TO PINTEREST.

Emily is not only the featured Woman of the Week, but my darling younger sister as well. Aside from the family cruise we went on together, our first time abroad was when she joined me in Belize for a week as I kicked off my trip through Central America. Most recently, I got to watch her take off on her own, heading to Serbia through a school program alongside classmates and professors – I am a proud sissy and am excited to share her story with you all!

I’m 20 years old and going to be a senior at IU. I’m studying recreational therapy, and want to go to grad school occupational therapy for that. I haven’t travelled a ton. I went on a cruise when I was little, and then I went to Belize with you [Sarah] for a week after my freshman year at IU, but that’s the only time I’ve been out of the country until recently. 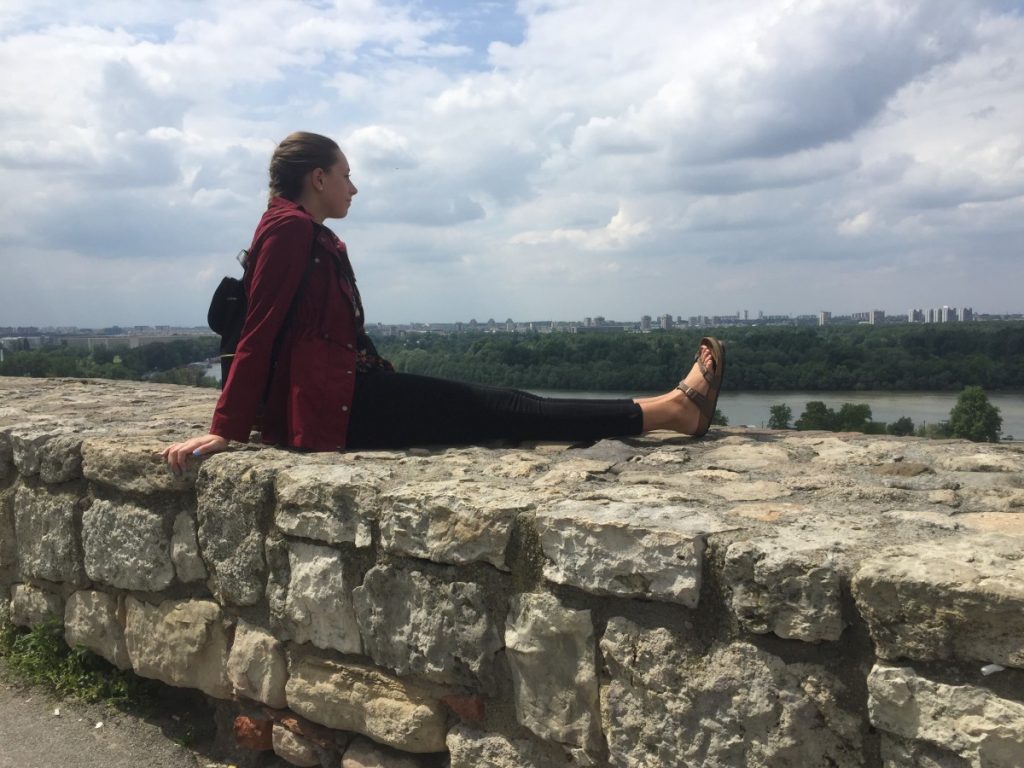 Most recently, I went to Serbia with three of my professors from my major, and about ten girls also from the major, recreational therapy students. We all went to Serbia to experience some of their special education schools and how they treat disability. We also got to visit some institutions which was interesting because we don’t really have those here anymore. We got to see how they view disability in Serbia, and these institutions definitely were more of an excluded sort of thing, it was very isolated. There wasn’t much inclusion – we tend to push inclusion in my field of study. We want students with disabilities to get to experience everything with everyone else, but these were institutions just for people with disabilities and that’s all they know. They don’t interact often with other people, but it was interesting to see because it seemed to be working just as well as what we do here, it was just a different way of looking at it. Everyone seemed extremely happy, even in the institutions that didn’t have the best conditions, the residents were just big families.

We were there about three weeks in Serbia, and then we brought back two of the girls that go to university in Belgrade. They came back to Bradford Woods in Indiana for a week with us, where we worked with Camp Highlight, which is for children with Down Syndrome. So they got to come back and see how we treat disability too.

While we were in Serbia, we also did a day trip to Romania. We went to Timisoara, which was just a lot of churches and such. Definitely something for a day trip, not to stay there for long. 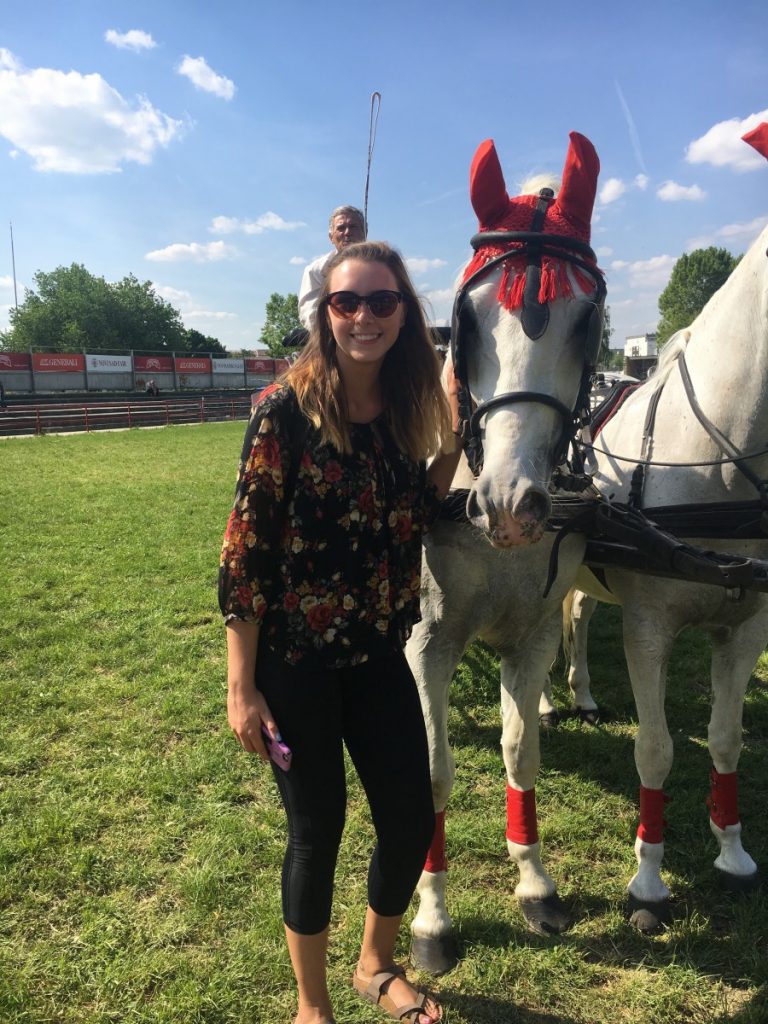 This trip to Serbia was more for the school experience, getting to actually do something that would relate and work with my future career.  But overall I think it’s just cool, it opens your eyes to see how people look at our country, how different we are and in what ways. You get to learn a lot about yourself and what you’re capable of doing.

I did this past trip in the summer, so that helped not being in school and working. I just ended up starting work later after I got back from this trip. I work with the office of the registrar at IU and help enroll the incoming freshman in all their classes, and it’s only part time. I think it would be a lot harder if I had a full-time job, but they’re pretty flexible at IU just because we are all students and they know a lot of people go home for the summers.

Financially, I got a lot of scholarships money because it was a school trip. The entire trip was paid for, I just had to pay for the three credits for the actual class. So looking into that definitely helped a lot. 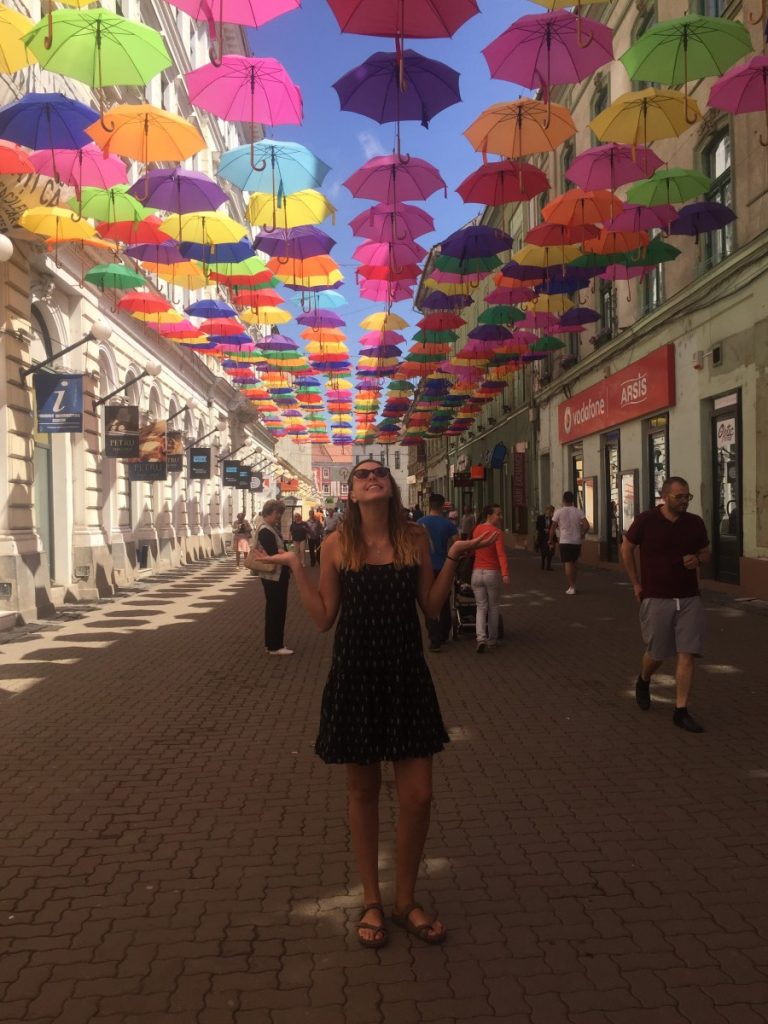 Probably just to be flexible, flexible and patient. For Serbia, especially, they go on their own time completely. If you say you’re having dinner at seven, you might not actually all get there until 8, and probably won’t eat for another hour. It’s just a much slower pace, they’re not in as much of a rush as we seem to be here. You just have to kind of learn to work with whatever you’re doing at the time.

Nothing is going to work out just as you plan, even if you plan it down to the last detail. That’s why we ended up going to Romania instead of Budapest – the border control was taking too long in Budapest – so you just have to be flexible. 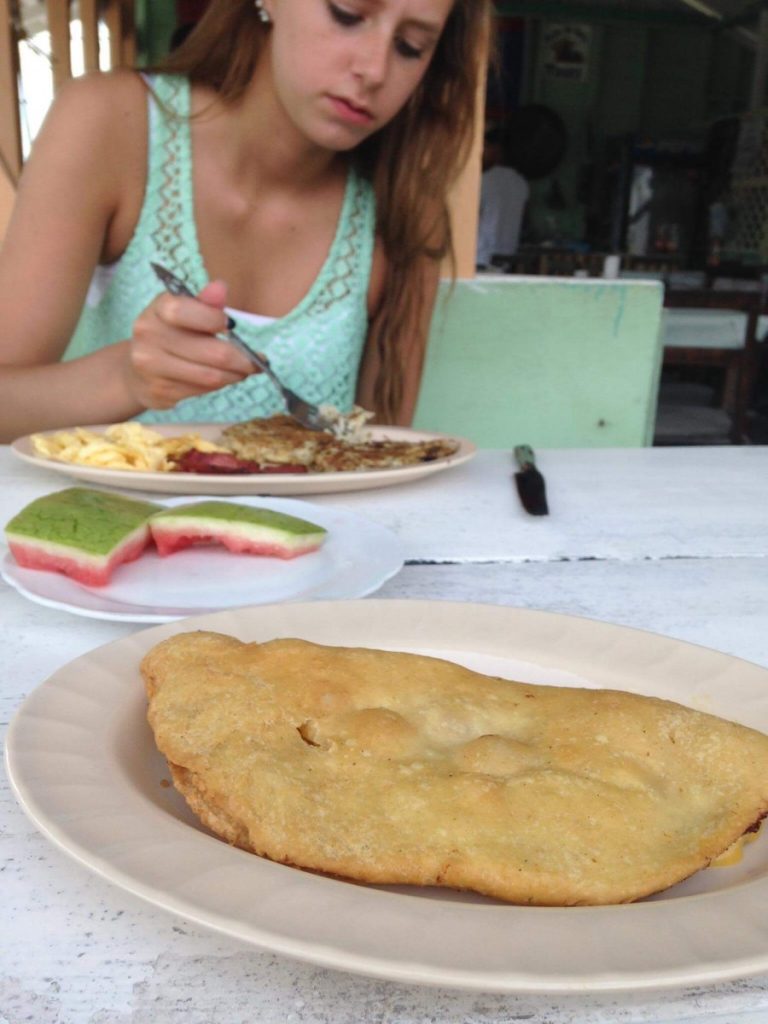 At first, definitely. Just because I really like schedules and being on time for things, and we just ended up doing a lot of sitting around and waiting, which we don’t do much here. If we have an appointment we’re there ten minutes early, and if you wait for more than fifteen minutes to be seen you might leave, so it definitely took time to get adjusted to that.

I think I enjoyed parts of it once we were there for a little while. It was still difficult, just the times of starting things, but I liked once we were started that we went at a different pace. You might not start when you thought but you get to take your time and enjoy everyone’s company, it was not such a rushed thing. So that was fun eventually, but it took a bit. 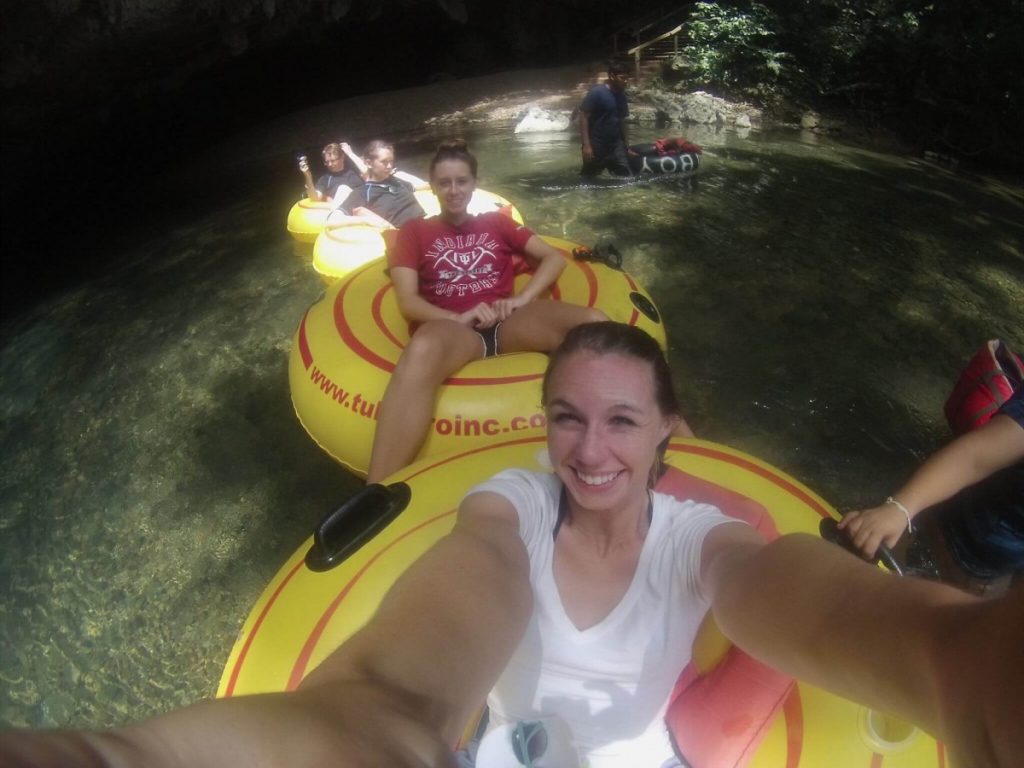 We had one of the professors at the University of Belgrade, he was kind of in charge of hosting us while we were in the city. He would just continually change the plans, and my professor was getting a little flustered because he had to take care of ten girls. So he’s trying to make plans for us and the other professor is just mixing it all up, and we’re like “okay we just have to go with the flow, it’s okay”. I think we were all a little stressed, but we just had to adjust and it all worked out in the end.

I think my favorite day on the Serbia trip was in Novi Sad. We had gone to the Milan Petrović school and we spent the day there, working in the workshops they have for the students. So I got to help paint things that they were going to be selling, and one of the girls got her hair cut in the salon there. So we were in little groups, and one of the guys that worked there was just taking us around to all these cool little workshops they had. We went to the roof and cut flowers in their garden and had pizza up there, and then later on we went to the agriculture fair. It was only about four of the girls who went with him, and it was kind of a spur of the moment, and it felt very Indiana – tractors everywhere, we rode in a horse and carriage. It was just a lot of fun, we didn’t really have many plans for that day so we just got to experience it.

It was cool to see what fun things could come out of the day when you just stayed flexible and open to everything. The guy that took us around, Johan, was super nice and was giving us the whole tour, so it was lots of fun. Johan worked at the Milan Petrović school, I think he was in charge of all the workshops, which was why he was taking us around and showing off all the cool things that the students do. Everyone we encountered was so excited for us to be there – they don’t get a lot of Americans so everyone was like “why would you come to Serbia? What?” but everyone was super nice. 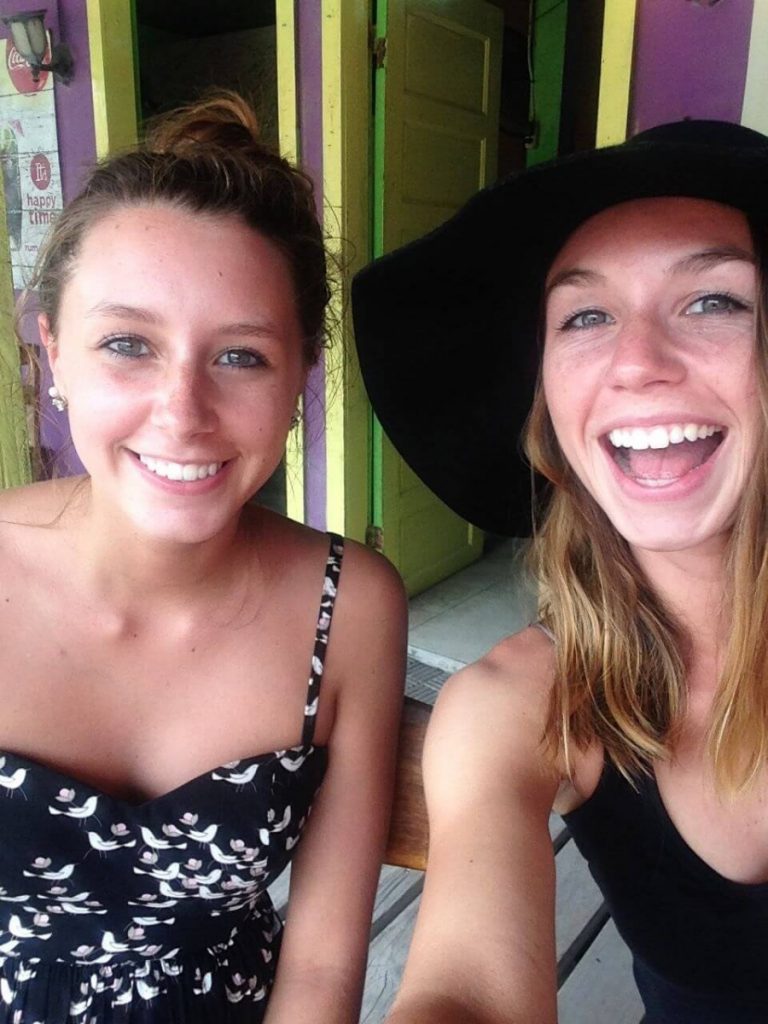 Pack light! I had my suitcase, my suitcase was over 50 pounds when I got to the airport – granted it was 3 weeks and the weather was supposed to be hot and cold so I had to pack for all of that. But that was difficult because we moved around a lot and I had to carry that around and take things out of it at the airport. I did feel well prepared, there was nothing I was really missing, but I definitely had a lot of extra stuff. So pack light, it’s easier.

Thanks for reading! Want more travel tips from Emily and women like her? 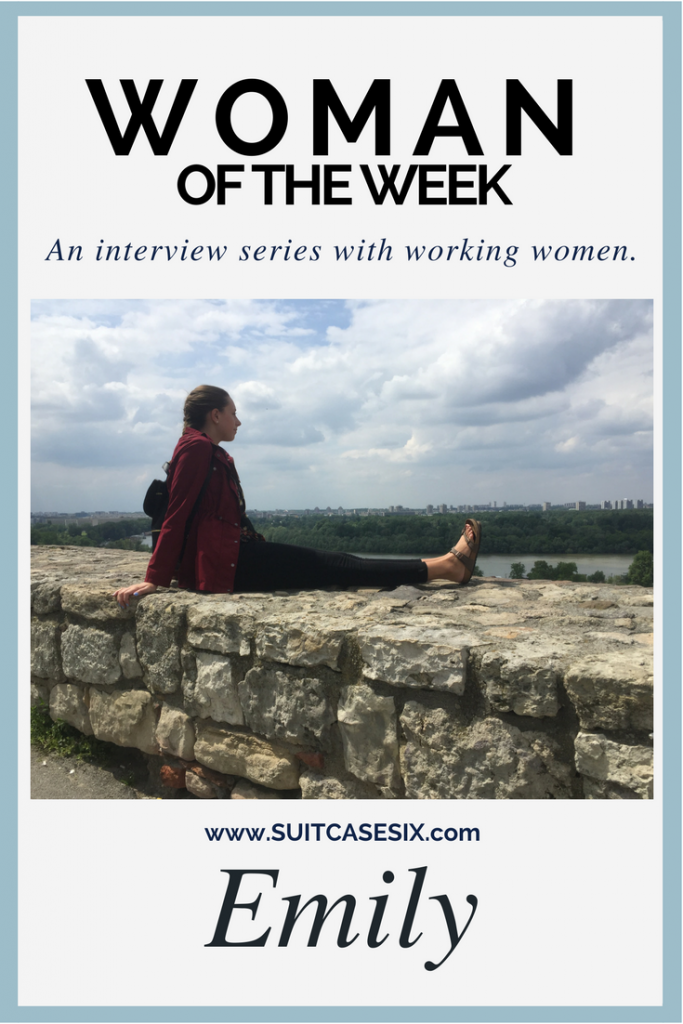